The idea for Becky’s Bikes started on an afternoon ride through beautiful Quebec City, Canada. Jim, a lifelong picture framer who was on vacation decided to try an E-Bike after having had knee replacement surgery. Jim was amazed to find out exactly how much help the bike could offer. This was when most E-Bikes were still very heavy and used lead-acid batteries. He thought to himself that all kinds of people could benefit from this new type of bike technology so he decided to bring the fun home with him. Naming the new bike shop Becky’s Bikes after his daughter, he became one of the first E-Bike dealers in the Midwest.

Early in this new market, our small team of friends and family saw a need: more power and range. This idea was improved upon when E-Bike manufacturers began to use lithium-ion batteries and internally geared hub motors, but Becky’s team, headed by Christian Baker, still had a vision. Something not just for recreation, but for a steady cardio workout as well as basic transportation needs. We recognized the fact that many of the bikes on the market had become so specialized that they sacrificed serviceability, which often led to a bike with limited available replacement parts. 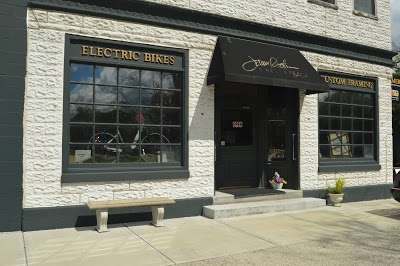 Now, with over 10 years experience, Becky's is proud to offer our own in-house brand of E-Bikes made specifically to deliver the value and reliability riders have been asking for.

The Becky’s line of E-Bikes was created with the goal of meeting the market needs for power, battery range, service, and price. Our team at Becky’s is always committed to searching for new technology and improvements. We take pride in customer satisfaction and the high quality of our products.

Also important, in addition to our wide assortment of bikes we offer a complete selection of parts and accessories for all types of bikes, as well as a full service repair shop. Any and all of your E-Bike problems can be solved here!

BRANDS WE WORK WITH